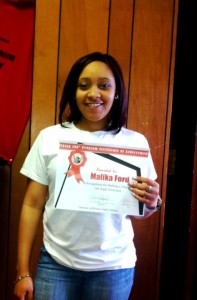 The program started last school year and rewards students who make a 180 degree turnaround in the “Right” direction.  The students nominated at the end of each nine-week grading period displayed notable improvement in Academics, Attendance, and Behavior, the areas that CIS-R uses to monitor students to demonstrate data-driven impact.  The students nominated receive rewards for that given grading period and the student who shows most improvement over the full year is recognized in June.  Selected students were eager to be a part of the group, and this incentive encouraged them to set and strive for lofty academic goals.

Overall, forty nine students were held accountable for maintaining appropriate behavior and attendance, in addition to academic progress.  Mr. Pettiford and Pastor Jones found that students were driven to improve if they were not nominated at the end of a grading period and worked harder to meet the nomination standards. 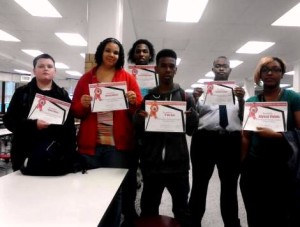 Students pose with their Viking 180 certificates

The students selected participated in special education curriculum, professional mental health counseling and behavior modification programs.  Over the first year of the program all participating students showed improvement in their behaviors, attitude, and commitment. 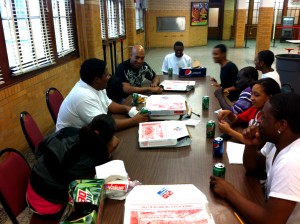 Pastor Jones was instrumental in providing student incentives for the program, which included Certificates of Achievement, T-shirts, and an Awards Pizza Party where they were honored.  The students also shared testimonials and plans for the future. They expressed the joy of overcoming barriers and as well as personal productive and positive academic transformations. Numerous students were repeat nominees and have continued to improve throughout this current school year.

The program effectively demonstrates that through recognition, encouragement and accountability students can be empowered to take charge of their educational success. 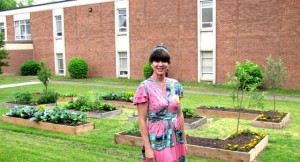 Anna Aquino poses in front of the vegetable garden at Chimborazo

About a year ago Anna Aquino began thinking about how she could give back to her community.  Anna is a landscape architect by profession and was looking for a unique way to contribute her time.

Motivated by a television piece on mentoring, she put her feelers out for an opportunity to connect with a student.  “I met Dan Stembridge, Executive Director of the Challenge Discovery Project.  Challenge Discovery runs a program called Say It With Heart at Chimborazo Elementary School and he told me about the opportunities to get involved at the school.  That is how I met Communities In Schools Site Coordinator, Caitlin Roberts, and how I started mentoring with Quianday.”  As she got to know Caitlin and the school administration, word got out that she was a well-renowned landscape artist.  “While I had wanted to volunteer to do something different than my own profession, Principal Burke was very convincing” Anna recounted with a smile.  In addition to her time mentoring with Quianday, Anna has dedicated hours of her time and thousands of her dollars to help construct a vegetable garden and spruce up the flower beds around the school grounds.  Caitlin Roberts considers Ms. Aquino one of her superhero volunteers and says that Anna’s volunteer work positively snowballed into so much support in such a short amount of time. 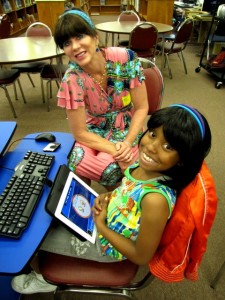 Anna and Quianday, the third grade student she mentors

“She has only been volunteering here since January and has made so many great things happen for both Quianday and our school landscape” Ms. Roberts expanded.  Through her own professional contacts, Anna was able to get many donations and discounts for gardening supplies and plants.  In talking about her impact on the school, Anna gave a simple but powerful explanation “To me gardens are beauty and beauty inspires happiness.”  She elaborated saying that beautifying a school can help create a sense of pride in the school, which she hopes will spill out to the wider Church Hill community.  It may already be working, as she has had community members come by while she has been gardening outside of the school and tell her how great it looks.  Answering a question about her favorite volunteer moment so far she said “A little first grade girl, pointing to the garden, tugged on my shirt and asked ‘Did you do all of this for me?’’

Anna feels that she has gained the most out of her volunteer work than anyone else she has helped but the school knows her impact is also their reward.

A Student Finds Her Voice 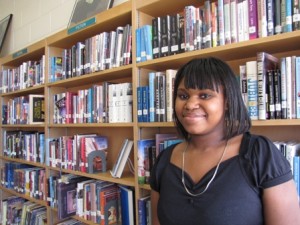 Poria is connected to success.  An honor roll student with a plan for the future, Poria came to George Wythe High School after spending two long-term suspensions for violent behavior in an alternative school.  Communities In Schools of Richmond worked with Poria through transition and connected her to:

These integrated programs became Poria’s tools for successful transition.  She was able to control her asthma, identify with multiple groups of students, develop a peer support system, engage academically, and find a voice as a student leader.  She is thriving in a comprehensive high school environment and attributes her success to working with Communities In Schools.

“Engaging at school gives me a different perspective.  I have more control over myself at school and at home and have new ways to express my feelings.”

Service is a new form of expression for Poria as well. She tutors a group of young children in Fairfield Court and volunteers at the SPCA.  Poria plans to attend college and study veterinary medicine.

© 2015-2022 Communities In Schools of Richmond. Site designed and developed by COLAB

We’re moving into our new space this fall, but for now you can find us at: